Because what the world needed, as Europe stumbles toward some kinds of resolution for Greece, was another Moody’s warning. Today’s edition is on Spanish regional debt (we’ve highlighted the main bits):

This will probably go down like a cup of cold sick with Barclays investors — an acquisition of a Spanish caja accompanied by a £4bn-£5bn rights issue. But that is what could be on cards according to Arturo De Frias Marques, the bank watcher at Evolution Securities.

A pause in Spanish bank piggybacking? 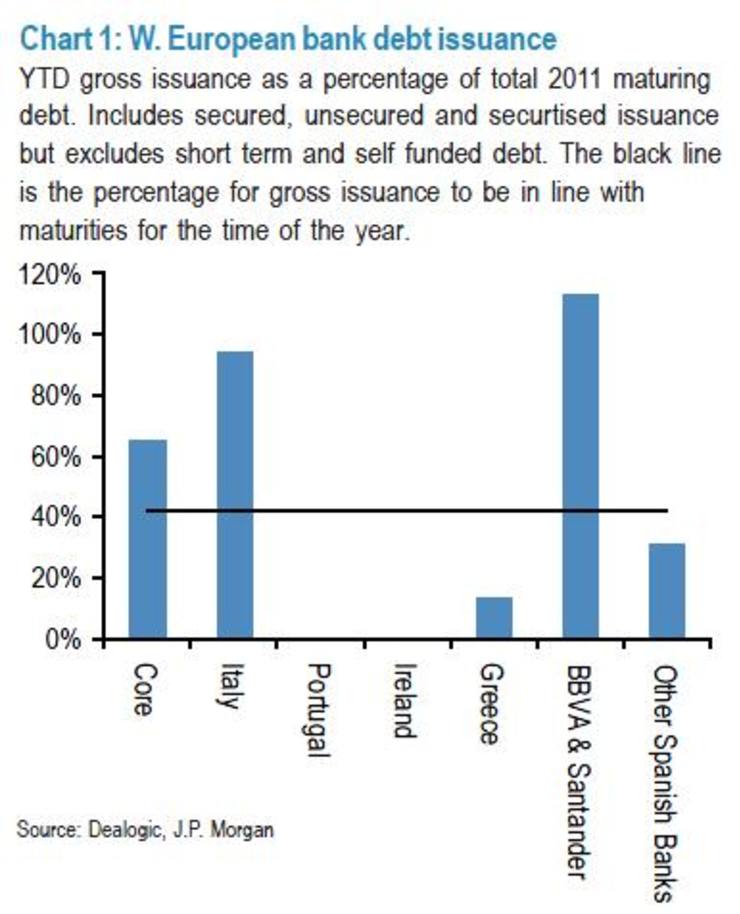 It’s gone all quiet in the other letters that make up a certain eurozone peripheral acronym… Spain and Italy have both been contenders for the next eurozone hotspot, of varying degrees. And while Spanish and Italian banks have both been rushing to raise capital or prefund in recent months, to help stave off, or prepare for, peripheral contagion, they seem to have had varied success with their efforts.

The euro and the Spanish and Italian bond markets came under pressure on Monday amid growing fears that Greece’s problems are hitting the bigger eurozone economies, reports the FT. The single currency fell to record lows against the Swiss franc and two-month lows against the dollar, while Spain’s cost of borrowing for 10-year debt hit its highest since late 2000. Italian 10-year bond yields also jumped. Worries over contagion spread to Europe’s equity markets, with Italian stocks the biggest fallers, down 3.3%. US stocks also fell with the S&P500 down 1.2%. One analyst likened the eurozone to a group of climbers roped together, saying: “As Greece slips, it pulls down other countries such as Spain and Italy”. Spanish bonds were hit by the Sunday rout of the ruling Socialists in regional elections while Italian bonds came under pressure after S&P on Friday cut its outlook on Italy’s A-plus rating to negative. Lex says the politics of the eurozone’s core is ‘more adrift than that of its periphery’. 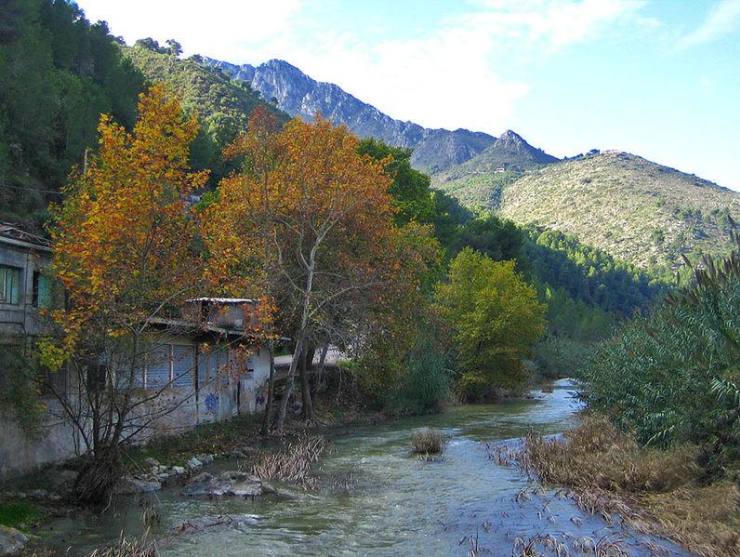 To the sunny climes of Valencia, Spain. 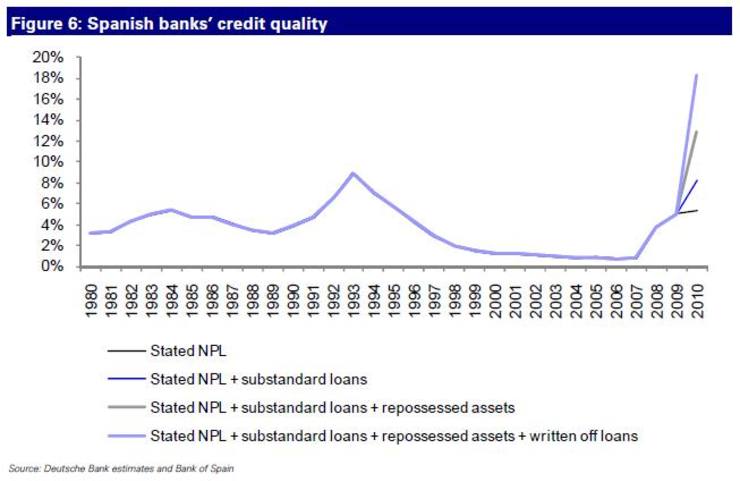 Why estimating the capital needs of Spain’s savings banks is so damn hard, in a single chart:

Here we go again. On Thursday, Moody’s downgraded Spain’s sovereign credit rating to Aa2 from Aa1, and also that of the FROB, its Fondo de Reestructuración Ordenada Bancaria. 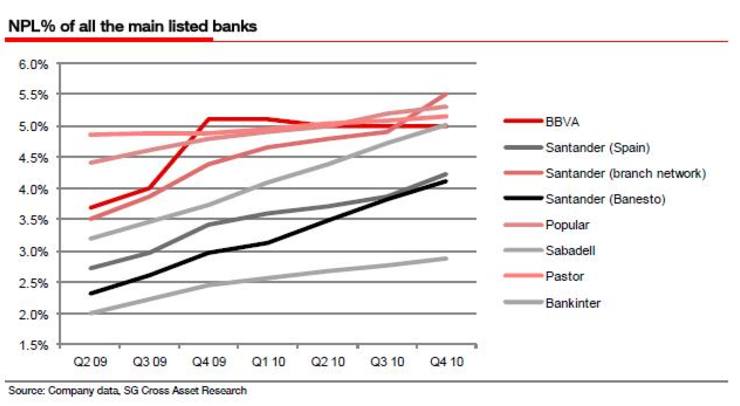 For some months now, all the Spanish banking concern has been focused on funding and net margin issues. Worries about loan losses (so 2009) have ebbed away. On Wednesday, Société Générale’s banking team says it’s time to revisit the issue. 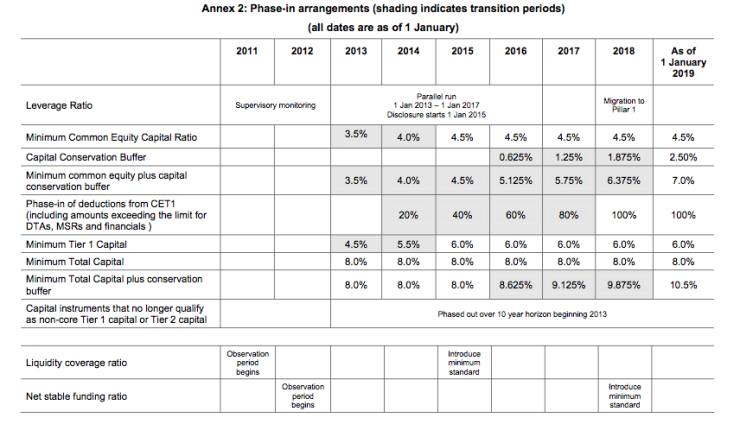 In case you missed this on Monday afternoon — here’s the FT’s report on Spain’s bank recapitalisation: Elena Salgado, finance minister, said the additional capital needed by the Spanish banking system would not exceed €20bn ($27bn) – at the lower end of estimates made by analysts and economists – and would ideally come from the private sector rather than the state. 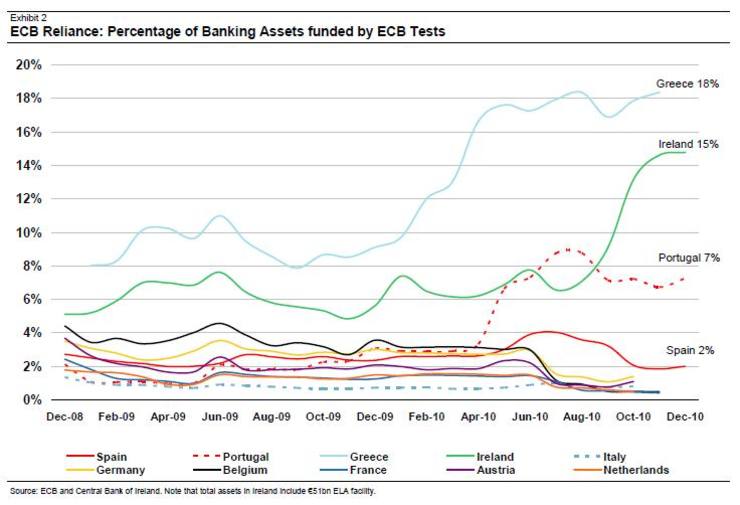 Bail out Portuguese and Spanish banks together?

Portugal’s bailout is pretty much priced-in, right? Well — it might be time to consider an intriguing, and plausible, game-changer.

Portugal is loudly occupying bond markets as they look for the next bailout candidate. But its always the quiet ones you should watch out for. So we’d suggest looking closer at how markets have repriced Belgian risk lately. It’s getting a higher profile, but investor reactions to the country are still something to behold.

Spain is all about the banks 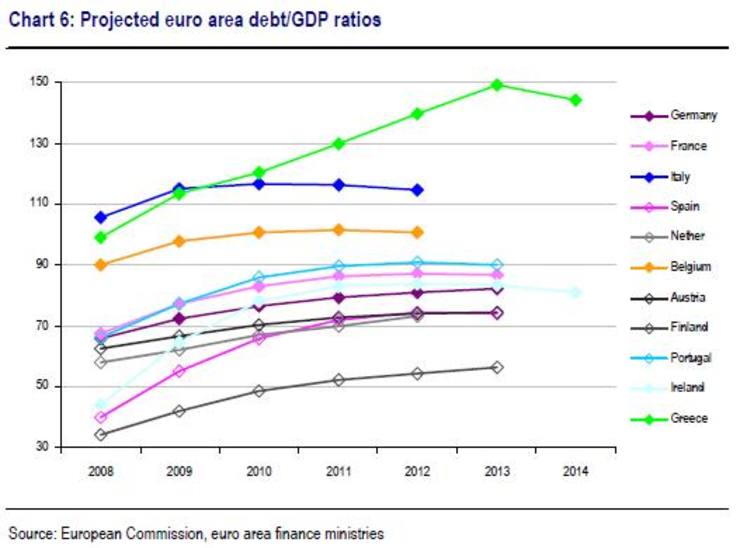 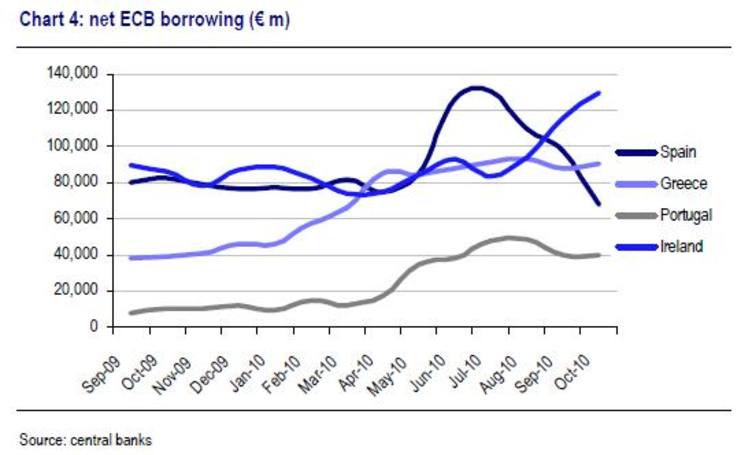 A reduction in Spanish borrowing from the ECB can only be a good thing. Right? 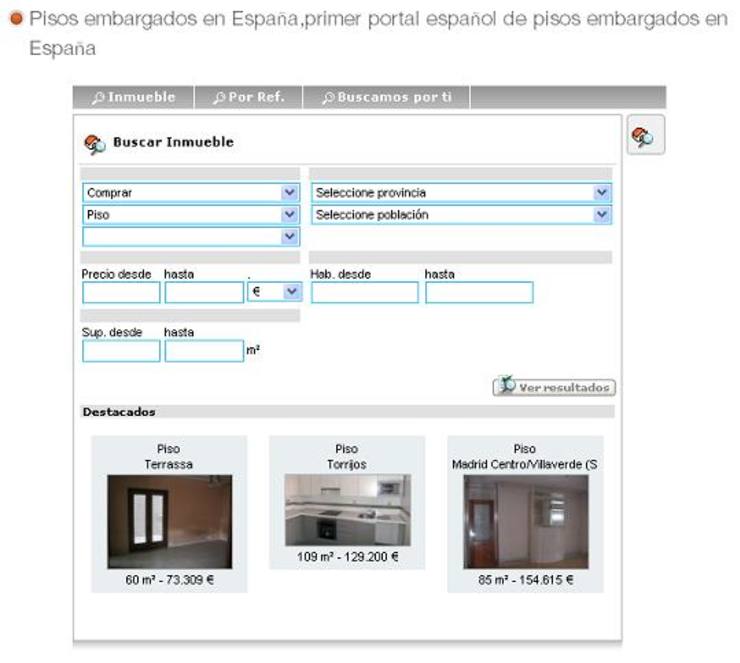 A top-read story on Bloomberg this Thursday morning? One that combines the words ‘foreclosed homes’ with ‘Spain’ and ‘tripled’ : 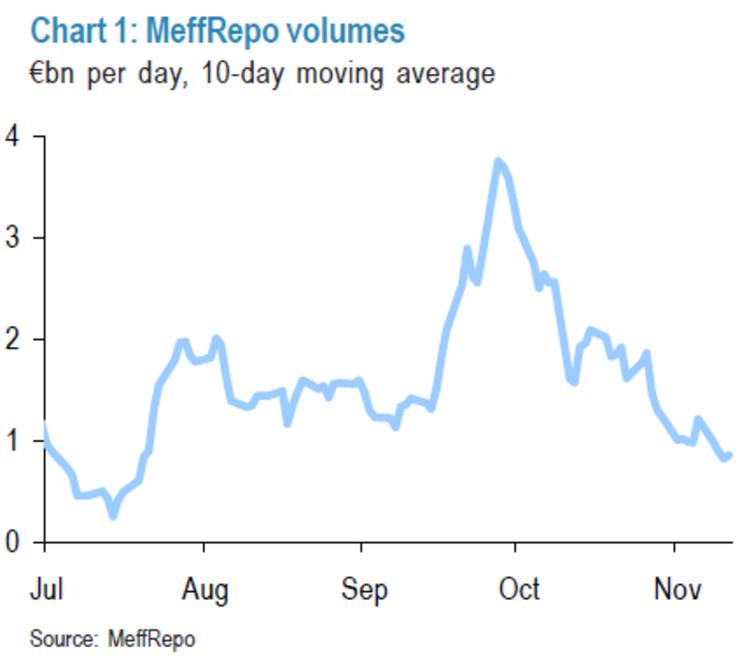 There’s some contagion control going on in Brussels on Monday following the weekend’s epic Irish bailout. As Reuters reports:

Just breaking — some early morning sovereign stress for Spain. Moody’s, the last major rating agency to rate Spain at triple-A, has downgraded the country to Aa1. Standard & Poor’s and Fitch already have it at the AA level. The Moody’s statement below:

Has LCH.Clearnet single-handedly saved the Spanish financial system? Early this month, and as the FT Trading Room reported, the Anglo-French clearing house announced a new service for Spanish government bonds and repos. And Spanish banks, as we all know now, have plenty of Spanish bonds.

What’s up with Spanish mortgage lending?

The non-performing pain in Spain is back in the limelight. The total stock of non-performing loans sloshing around the Spanish banking system hit €100bn in May, according to data from the Bank of Spain released on Monday.

Ahead of the European bank stress tests, here’s a couple of more-interesting-than-usual rating actions centring on financial institutions in Spain and Portugal. Although there’s been a low-grade rumour in the market of Fitch downgrading the sovereign itself (again? Fitch cut from AAA to AA+ in May). Here’s a rebuttal:

Stressing Spanish banks out, with Fitch 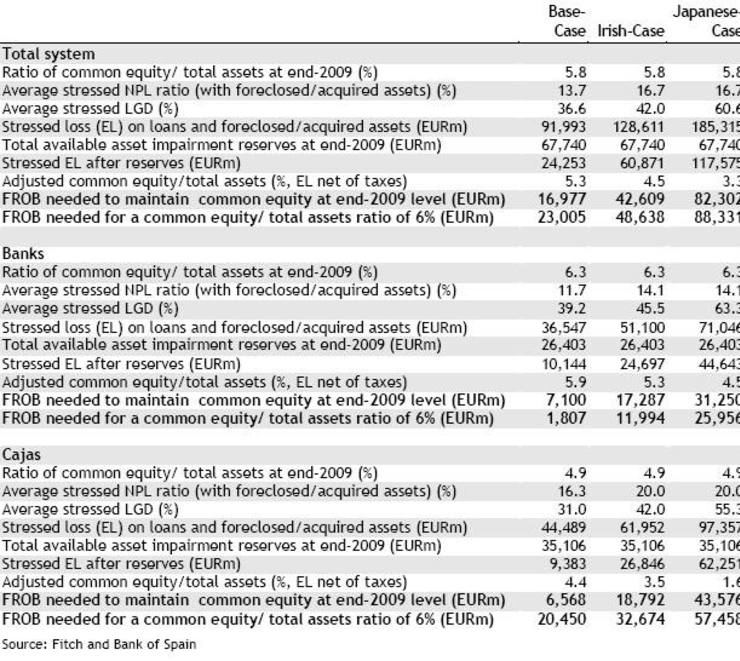 Here’s a late addition to FT Alphaville’s collection of unofficial European bank stress tests being put out in advance of the actual certified versions on July 23. This one’s from Fitch. The test focuses on Spanish banks’ domestic loan books — for which read the country’s cratering real estate market. 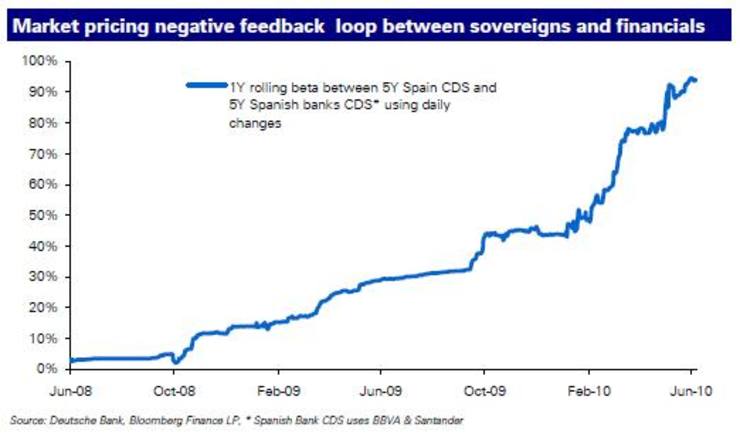 Bank of America Merrill Lynch has separated some facts from fiction in the case of the Spanish banking sector. Trouble is, as FT Alphaville notes, some of the “facts” are rather worrisome.

Add the credit analysts at BNP Paribas to the growing list of those concerned about the robustness of the Spanish banks. In a note published on Wednesday, analyst Olivia Frieser observed, in a comment on the findings of the June 2010 edition of the ECB’s Financial Stability Review, that Spanish banking sector assets total approximately €3,200bn.

Having cut Spain’s sovereign rating from AAA to AA+ on Friday, Fitch moved on Tuesday to adjust the ratings for a number Spanish financial institutions. First up, Spain’s sixth-largest bank, Banco Sabadell:

Bonfire of the sovereign ratings: Fitch strips Spain of its triple-A

US stocks moved sharply lower and the euro slid against the dollar after Fitch downgraded the Kingdom of Spain to AA+ from AAA on Friday. Here’s the statement, emphasis FT Alphaville’s: