In this guest post, Marcello Minenna discusses the pitfalls of European Safe Bonds. The views expressed here are his personal opinions and do not necessarily reflect the views of Consob.

If you like the euro, why not just call for a global gold standard? 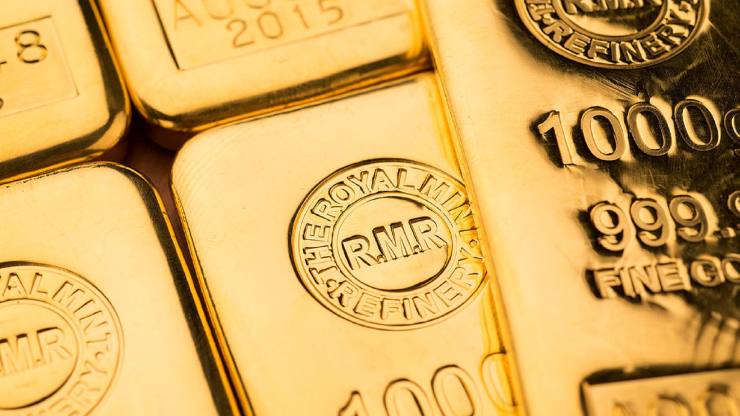 Why should the benefits of integration and price stability be limited to Europe? 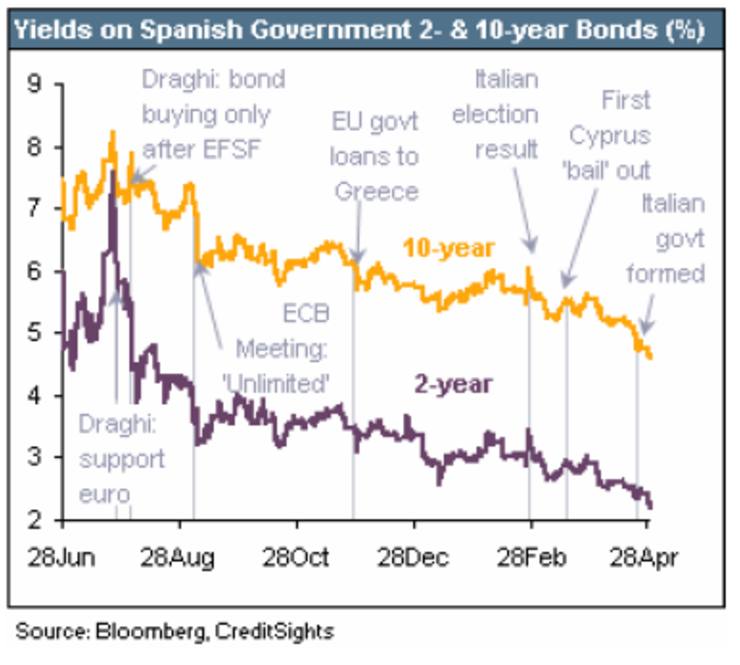 The chart above shows the decline in Spanish bond yields “occurring at a time that Spain has announced that it had not hit its deficit targets and would not hit next year’s,” as David Watts of CreditSights points out.

Sareb is ‘incrementally negative for Spain and its banking sector’

Some more details about Spain’s bad bank are filtering through, mainly on how it might function in practice. And analysts are finding that the more they find out, the more concerns they have. On Thursday Credit Suisse’s Ignacio Cerezo and Andrea Unzueta summed up their latest thoughts on AMC following a meeting with Cuatrecasas, legal advisers to the bank recap fund FROB. Overall, they see the new details that emerged as ” incrementally negative” for both Spain and its banking sector.

Rating agencies have a funny way of agreeing about Spain

“Moody’s keeps gun pointed at Spain but does not pull trigger” was one of the more colourful headlines to come from the agency’s confirmation of the sovereign’s Baa3 rating with a negative outlook on Tuesday. A little rally in bonds and equities duly followed: After the two notch downgrade by S&P about a week ago, both agencies now have the sovereign on equivalent ratings. It’s pretty hilarious to compare and contrast the reasons for each agency’s (in)action.

So Standard & Poor’s has cut Spain by two notches, to BBB- from BBB+, just one notch above junk level. As the FT said: The rating agency’s move came after markets had closed in New York, but the euro still fell slightly on the news to trade 0.1 per cent lower at $1.2870. S&P’s report is in here.

Moody’s on Spanish banks and others on the bailout muddle

The Oliver Wyman report landed last week. The headline was that Spain’s banks would need almost €60bn in new capital and that seven out of the 14 Spanish banks under review failed the ‘bottom up’ test. The actual recap figure was €59.3bn, falling to €53.7bn because banks are allowed to count in both mergers in which they’re involved and deferred tax assets. We expressed some scepticism about those DTA’s and the rather hopeful proposition that…

A week of Spain-related excitement is not over just yet

Spain has been grabbing the headlines all this week and while it may be Friday afternoon, the excitement isn’t over just yet. Moody’s is widely expected to announce whether it’s going to downgrade Spain’s Baa3 credit rating (possibly to junk) Friday after the European markets close. Oliver Wyman’s second audit of the country’s banking system should come out around the same time. Ahead of all that we wanted to talk you through a quick recap of the latest developments because, as UBS strategist Justin Knight rightly points out, “the areas of concern are now becoming numerous” and it’s making the question of when Spain might request aid increasingly complex.

Behind the headline, Spanish deposits edition 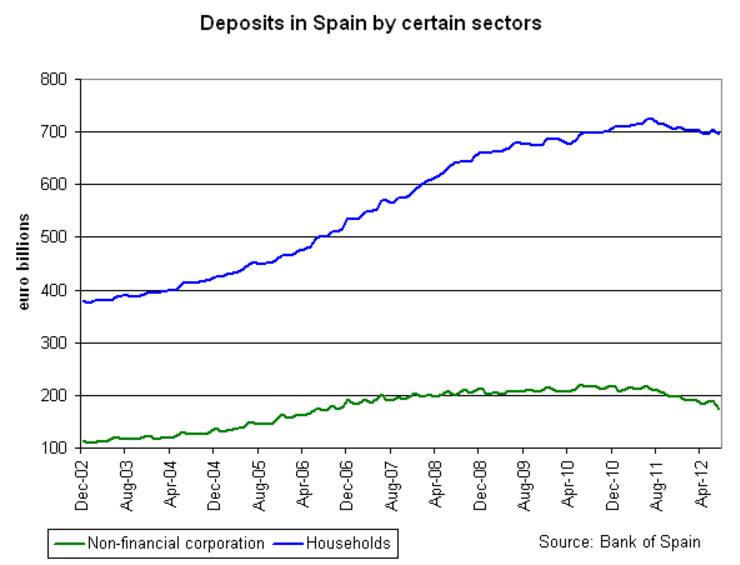 Data from the European Central Bank showed that €74bn of deposits left Spain in July. This was a 4.7 per cent drop from June, which seems rather a lot for just one month. The figure for August, released on Thursday morning, revealed that a further €17bn had headed out the door. While this so-called deposit flight is being reported as putting pressure on the Spanish government, the data behind it isn’t quite as concerning as one would imagine. Should you worry about this kind of thing in Spanish debt?

About that flight of the Spanish deposits

This is something we have been meaning to get around to for a while. It’s about that Spanish ‘bank jog’ making headlines all over the place and seems pretty timely right now, what with the banking deposit scheme thing floundering so badly. From the FT: As you mull over the leaked reports of what Draghi might say on Thursday and its implications for Spain’s banking system (and many other things), here’s an updated and stunning note on recent Spanish capital flight generally from Nomura: The main conclusion from looking at the details of the country-specific balance of payments within the eurozone is that Spain is in a category of its own. While there are some outflows in countries like Portugal and Italy, the size of these outflows is not nearly as large as in Spain. On a 3-month rolling basis, Italy’s outflows represent about 15% of GDP currently, while they represent about 50% of GDP for Spain.

Bloomberg reported on Thursday that the first €30bn of Spain’s bank bailout fund is “imminently” going to be making its way to Bankia. Why?

The Eurogroup finance ministers have inched things forward with their long Monday summit, but the press conference in the early hours of this morning also reaffirmed that many big questions remain. The first headline is that Spain gets an extra year to meet its 3 per cent deficit-to-GDP ratio target. Just as well, because the country was extremely unlikely to hit that by the end of next year. The Journal reports that a draft statement says this means Spain can now run a 6.3 per cent deficit this year without risking penalties, compared with 5.3 per cent under the 2013 target.

The review of the Spanish banks by the “big four” auditors may have been postponed until September, but there is another! It’s by Oliver Wyman and Roland Berger, and at pixel time it looked like the Spanish press were reporting that the banking system needs around another €65bn in capital.

Moody’s cuts Spain to one notch above junk 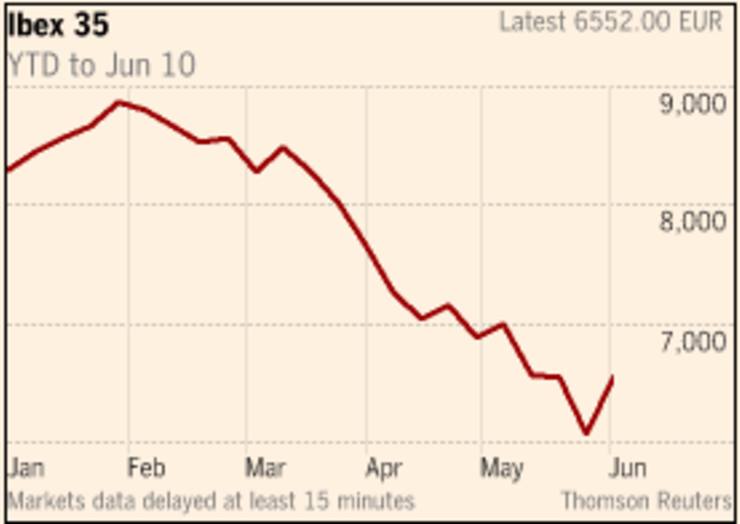 Why shouldn’t equity and (at least in the short term) Spanish bonds rally?

“If the Spanish state has difficulty in financing itself outside Spain, then the difficulties will be even greater for those in the private sector…” Circularity. Reinforcing the sovereign-bank loop. However you’d put it – this weekend’s ‘rescue’ deal for Spain’s banks seemed designed to avoid doing this. Or at least to avoid appearing to do so.

Moody’s tries to ruin our weekend, would have succeeded were it not already ruined

We already knew we’d have to watch for a Spanish banking bailout request tomorrow. Now comes Moody’s with a report warning that “recent developments in Spain and Greece could lead to rating reviews and actions on many of the euro area countries” — and offering a generally downbeat if less-than-original assessment of the euro zone’s future in general.

Fitch has just cut Spain’s rating to ‘BBB’ from ‘A’… Outlook Negative. (That’s the same rating as Kazakhstan, for those keeping score). And, in a seperate report also just released, Fitch estimated that the Spanish banking system will need require additional capital of between €50bn and €60bn to cover potential stress losses on their domestic loan portfolios. Under a more extreme scenario, based on what occurred in Ireland, these amounts rise to between €90bn and €100bn.

The ratings agency announced a two-notch downgrade, from A1 to Aa2 at the predictably late hour of 11pm Madrid time, says FT Alphaville. The new rating, accompanied by a negative outlook, is attributed mainly to the lack of a eurozone debt solution, poor growth prospects (Moody’s does not expect Spain to see 2 per cent growth any time soon) and the consequent difficulty in meeting fiscal targets, particularly because of regional government debt. S&P and Fitch both rate Spain at AA-, one notch higher than Moody’s, although the ratings are not directly comparable. Moody’s currently rates Italy at A2, with negative outlook, one notch below Spain. The news was a double whammy, says the WSJ, coming on the same day that Spain’s government said housing prices had fallen during the third quarter. Earlier on Tuesday S&P downgraded three of the largest Italian banks, reports the FT.

Moody’s downgrades Spain to A1 from Aa2

It’s that time again. 11pm in Madrid, which can only mean a downgrade of the Spanish sovereign, this time by Moody’s. It’s a double-notch downgrade, taking Spain to A1 with negative outlook, using Moody’s schematic. S&P and Fitch both rate Spain at AA-, one notch higher than Moody’s, although the ratings are not directly comparable. Moody’s currently rates Italy at A2, with negative outlook, one notch below Spain.

Standard & Poor’s has downgraded Spain’s sovereign debt rating, citing slowing growth and a weakening financial system, reports the FT. In an announcement late on Thursday, the rating agency knocked Spain’s rating down one notch from double A, where it has been since last April, to double A minus. It also kept the country’s rating on a negative outlook. S&P’s statement, which you can read in full on FT Alphaville, said that despite “resilience” in Spain’s economy this year, there were “heightened risks to Spain’s growth prospects” due to high unemployment, tighter financial conditions, a high level of debt and a broader eurozone slowdown. Earlier in the day analysts and government economists warned that Spain would be unlikely to meet its ambition of reducing its budget deficit to six per cent of GDP by the end of the year, writes the FT. Meanwhile Fitch downgraded several European banks on Friday morning and put several others on watch as part of a global review, reports Bloomberg.

Standard & Poor’s has downgraded Spain’s sovereign debt rating, citing slowing growth and a weakening financial system, reports the FT. In an announcement late on Thursday, the rating agency knocked Spain’s rating down one notch from double A, where it has been since last April, to double A minus. It also kept the country’s rating on a negative outlook. S&P’s statement, which you can read in full on FT Alphaville, said that despite “resilience” in Spain’s economy this year, there were “heightened risks to Spain’s growth prospects” due to high unemployment, tighter financial conditions, a high level of debt and a broader eurozone slowdown. Earlier in the day analysts and government economists warned that Spain would be unlikely to meet its ambition of reducing its budget deficit to six per cent of GDP by the end of the year, writes the FT.

It’s midnight in Madrid, and that — obviously — calls for an S&P downgrade of the Spanish sovereign to AA- from AA. Full text below. It’s all pretty standard analysis, frankly, so go back to bed Europe…

Where the sovereign goes, the banks follow. (And vice-versa, of course.) Fitch and S&P downgraded a slew of Spanish banks on Tuesday evening. The rating rationales are pasted below.

Fitch gives an unwelcome weekend parting gift to traders and hacks with dual downgrades on Friday afternoon of Spain and Italy. Portugal was given a stay of execution, according to Bloomberg. Start with Italy, which is less surprising following the triple-notch dump by Moody’s earlier in the week, although it remains the more worrying of the two (and arguably the most worrying in the world right now, as we previously mentioned).

So much for a quiet August. Just a week after eurozone authorities announced a new bailout package for Greece (and just before the start of Europe’s traditional August holiday period), Moody’s has put Spain on review for downgrade.