David Cameron on Monday defended his use of the British veto at last week’s European Union summit as in the “national interest”, but the strains placed on his coalition government were laid bare when his deputy, Nick Clegg, refused to sit alongside him in the House of Commons, the FT reports. Mr Clegg, leader of the pro-European Liberal Democrats, claims the veto was bad for British business and would leave the UK isolated. But the prime minister was cheered by Tory MPs who claimed he had shown “bulldog spirit”. Mr Cameron’s refusal to agree an EU treaty change to reinforce eurozone fiscal discipline in the absence of safeguards for the City of London continues to cause anger across Europe. That could be further inflamed by Britain’s refusal to take part in an urgent €200bn funding boost for the International Monetary Fund to tackle the crisis. The Wall Street Journal reports that the financial services industry is all concerned that the EU will pursue new regulations requiring certain types of business to be transacted within the euro zone, cutting London out of the equation.

The City of London job cull… 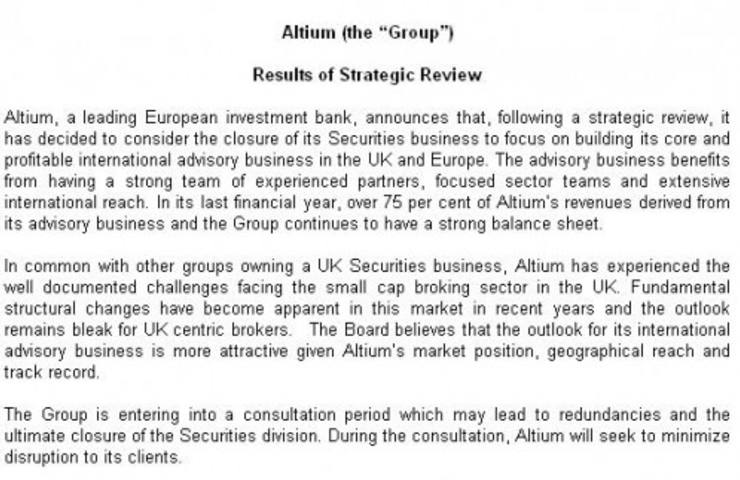 … shows no signs of letting up. The latest casualty is Altium Securities.

A golden opportunity for the FTSE

On Tuesday we asked what rules should govern entry to the FTSE UK indices. We launched our consultation in response to a similar survey from the FTSE Group, which sought market feedback on the free float rules for its various indices. This followed investor outcry over oligarch-owned Russian companies (Evraz, Polyus Gold and Polymetal) seeking to list on the main market while keeping control out of public hands.

Britain is bracing for defeat in Brussels on a critical piece of financial regulation, which would force it to cede control over the shape of key markets in the City of London, home to more than three-quarters of Europe’s derivatives trading, the FT reports. George Osborne, UK chancellor, is insisting that European Union finance ministers next week continue to debate new requirements for clearing derivatives, in spite of his counterparts making clear that London is alone in opposing the package. Mr Osborne is expected to break from next week’s Conservative party conference in Manchester and travel to Luxembourg to seek a reprieve over the derivatives regulation, as well as press his European colleagues for action on the eurozone crisis and fight a proposed financial transaction tax that would hit trades that are overwhelmingly routed through the City of London.

China to back London as offshore renminbi centre

China is for the first time to give formal backing to moves by British banks to turn the City of London into an offshore trading centre for the renminbi, UK government officials have told the FT. As George Osborne, the chancellor, prepares to hold talks in London with Wang Qishan, the Chinese vice-premier, on Thursday British officials say a joint statement by both countries backing the growth of renminbi trading in London is set to be the centrepiece of their meeting. Meanwhile Chinese officials told EU business executives that the yuan will achieve “full convertibility” by 2015, Bloomberg reports, according to EU Chamber of Commerce in China president Davide Cucino. Mr Cucino declined to identify the officials, saying only that the information was conveyed at a meeting, and said the move to convertibility would be taken in steps.

China to back London as offshore renminbi centre

China is for the first time to give formal backing to moves by British banks to turn the City of London into an offshore trading centre for the renminbi, UK government officials have told the Financial Times. As George Osborne, the chancellor, prepares to hold talks in London with Wang Qishan, the Chinese vice-premier, on Thursday British officials say a joint statement by both countries backing the growth of renminbi trading in London is set to be the centrepiece of their meeting. British banks and financial institutions have for some time been pressing for London to become an offshore trading centre for the Chinese cuurrency. Treasury officials say British banks and financial services institutions increasingly want to trade in the renminbi, seeing this as a rapidly growing market in foreign exchange and bond issuance.

Yesterday the Merkozy plan for a Financial Transaction Tax caused some hefty damage for London-listed exchanges and brokers. Not a surprise really. The analysts at Adam Smith Institute were hopping mad on Thursday: 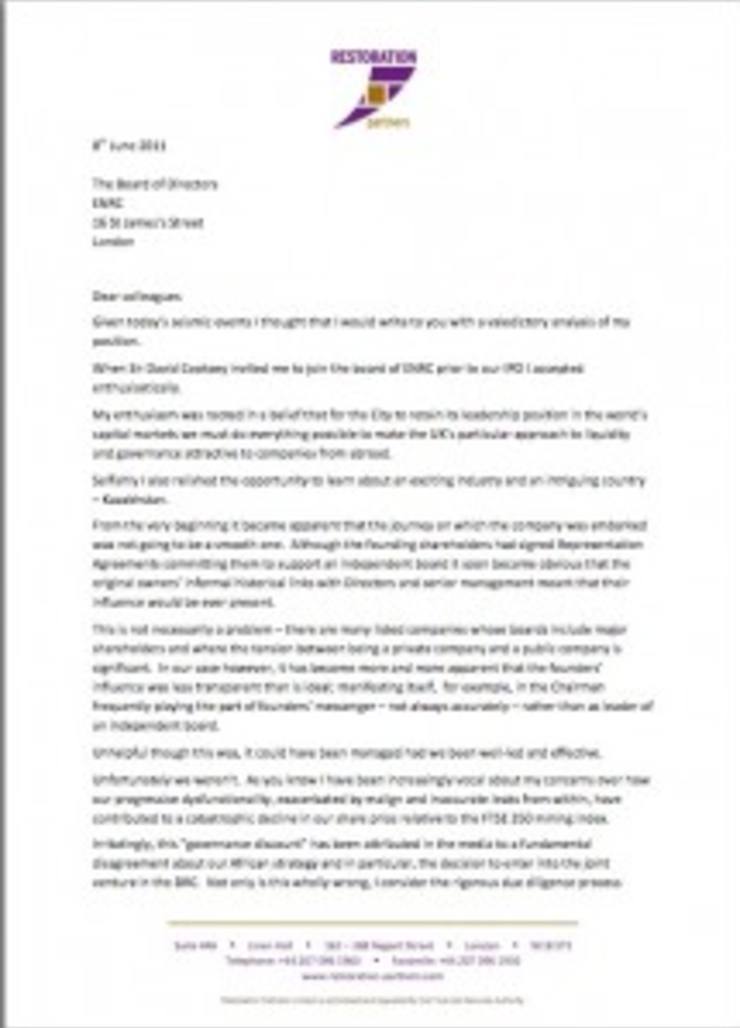 CNH centre: coming to a City near you? 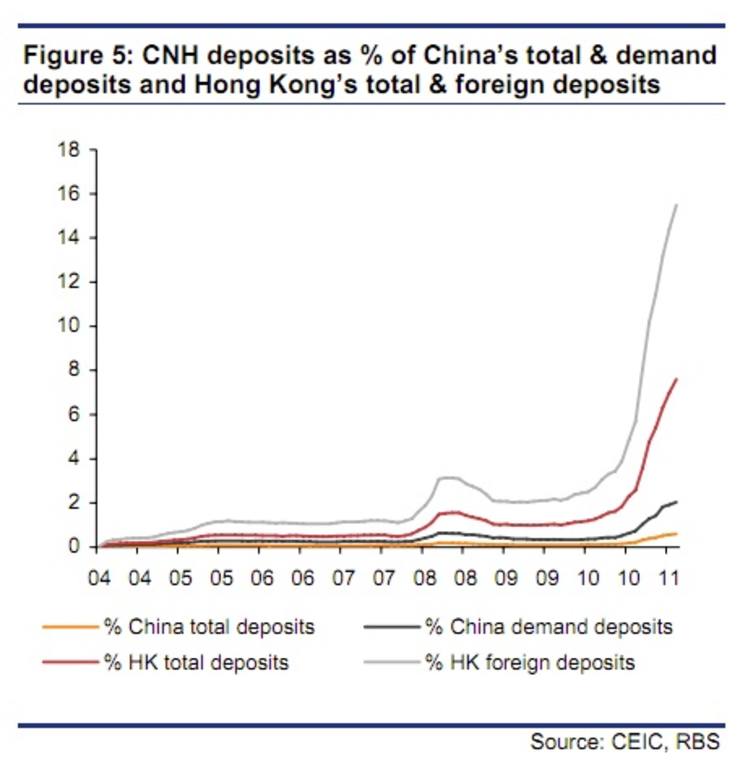 We knew that China’s efforts to internationalise the RMB were moving along nicely, but thus far CNH deposits (yuan held offshore in Hong Kong) are still a relatively small part of China’s total deposit base. But a new paper from RBS notes that as a percentage of Hong Kong deposits, they’re becoming a big deal indeed, and quickly: 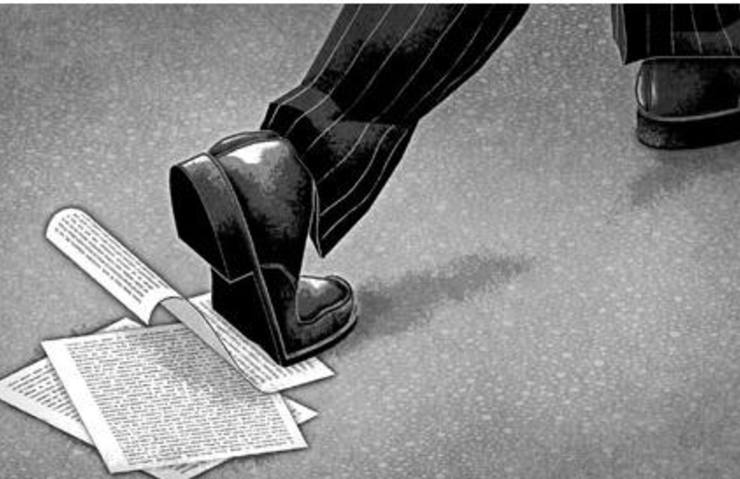 Comment, analysis and other offerings from Tuesday’s FT, Philip Stephens: The banks get away with it, again There are a couple of things to say about Britain’s banks, says the FT columnist. They still pose a serious threat to the nation’s long-term stability and prosperity. They rely for their profits – and for the huge bonuses paid to senior staff – on the fact that taxpayers are underwriting the risks. Thus public subsidy is turned into private profit.

In case you missed these stories, weekend headlines from the FT and other UK media:* From the Financial Times- Alpha agrees to buy Massey for $8.5 billion- Minister to reveal Tote bidding shortlist- Carlyle creates dental amalgam- Davidson replaces Locke as Mecom head- REG shares up 30% after rejecting takeover- Britannia saves Pontin’s from administration

Sucden Financial turns its attention to Delta One

An interesting press release via Mondo Visione on Wednesday (our emphasis): Sucden Financial has announced that it will be launching a new service geared towards institutions to capture brokerage opportunities in the Delta One and Equity derivatives and finance arena with effect from January 2011. 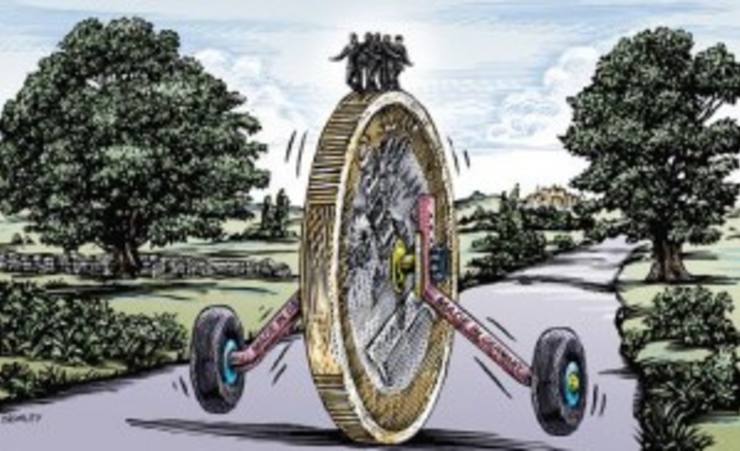 Comment, analysis and other offerings from Monday’s FT, Wolfgang Münchau: Berlin’s goal is limited liability I have been observing the European Union for a while, but I have rarely seen a political victory as total and far-reaching as that of Angela Merkel, the German chancellor, last week, the FT columnist writes. As one seasoned observer put it, Ms Merkel was the only one in the European Council who knew what she wanted. And she got exactly that. She got an amendment to the Lisbon treaty, which says that any crisis mechanism can only be triggered as a last resort option. She got agreement on her nine points on a future crisis mechanism – intergovernmental, with preservation of the national veto, with collective action clauses to wipe out bondholders, and with strict conditionality. And she utterly defeated any attempt to extend the ceiling and the scope of the existing crisis mechanism. Not one of the other leaders dared suggest a eurozone bond. Last week, the EU became a fully paid-up subscriber to the German version of crisis management – adjustment through deficit-cutting, and if necessary, through deflation.

Geneva will leave London behind and become the world’s most important trading hub for physical energy commodities, including oil, as leading companies relocate dozens of traders to Switzerland, according to industry executives, the FT reports. The transfers threaten the UK capital’s leadership in physical crude and oil products, first established in the late 1980s, and come amid broader financial industry complaints about stiffer regulation, higher taxes and poor transport infrastructure in London. The Geneva Trading and Shipping Association, the industry body, believes the Swiss city now “ties with London as Europe’s number-one oil trading hub”. But oil executives said the balance was turning in the favour of the Swiss city. Readers will have heard the case against real-estate and commercial real-estate investments. But here, courtesy of Patrick Moonen of ING IM, is a more optimistic view on Wednesday: Real estate outperformance could continue in 2011. ING IM says there are a number of supporting factors for this prediction – notably that many real estate listed companies have refinanced and that the underlying commercial property is at a turning point on vacancies and rents, while dividend yields in the developed markets are attractive.

Jobs and the City…

Whether you’re an increasingly impecunious chief executive at a mid-ranked UK company, or one of the City’s increasingly flush “AVPs” (assistance vice-presidents), some – interestingly timed – reports on Monday are telling us a few things. First, Reuters reports that the average pay of junior executives in London’s financial sector rose sharply over the summer.

Newer results You are on page 4 Older results