The dark side of data centres

Most technology users remain blissfully unaware of the internet’s carbon footprint because most “users” never have to come up close and personal with a data centre. Yet, for all the energy efficiency that technology brings us, data centres remain the technology world’s dark little energy guzzling secret. Data centres, it could be said, represent the unglamorous side of the technology business. They’re the plumbing that holds the whole thing together. They’re the secret sauce that gives one player an advantage over another. As a consequence, there’s zero advantage — either from a security or cosmetic point of view — of bringing attention to where your data centre is located, how it is run or how much energy it consumes. BoAML follow in the footsteps of UBS with a whopper report on the smartening up of the world’s energy markets. It’s a mighty 256 pager. We’re still going through it in detail, but couldn’t resist flagging up the following factoid about “avoided energy” before revisiting some of the larger themes (among them, the reduction of power consumed by data centres). What the analysts mean by “avoided energy” is how much energy we’ve avoided using thanks to improved efficiency and know-how.

Electric cars as a medium for electricity storage and discharge We promised some more insights from the UBS report on solar, batteries and electric vehicles. So here goes. First, a chart showing just how quickly solar costs have been falling since 2007:

Yes, yes they do. At least the ones from UBS, who are out this week with a huge report on solar, batteries and electric cars and their capacity to re-shape the current electric system in the next few years. Case in point, these charts:

Development banks good in crises, even better all other times

This is a guest post by Luciano Coutinho, CEO, BNDES, Brazilian Development Bank for the FT Alphaville Mission Finance series, in which he argues that development banks act as system stabilisers for the real economy. The 2008-2009 crisis revealed to the world what was known at a national level: qualified public financial institutions are of extreme importance when private credit slows down. Delicate financial situations require immediate and efficient actions and the recent countercyclical success of development banks (DBs) shows to what extent these institutions behave as system stabilisers in times of credit contraction.

Want to know why Modi is so focused on energy reform? From Goldman’s Tushar Poddar and team:

Camp Alphaville, a wonk in the park. July 2nd in London. Details here. Markets: Asia-Pacific markets rallied in response to a series of supportive data releases pointing to growth around the region. Japan’s Nikkei 225 led gains, rising 0.8 per cent to reclaim the 15,000 mark for the first time in two months. It is on pace for a third weekly gain, after climbing 2.1 per cent on Monday. Equities were aided by a 0.6 per cent weakening in the yen against the US dollar overnight, to about Y102.37, which supports Tokyo’s export stocks. The stock market was also lifted by domestic media reports speculating on the possibility of Prime Minister Shinzo Abe announcing an early cut to the corporate tax rate, which at nearly 36 per cent is among the highest in the world. (FT’s Global Market Overview)

FURTHER FURTHER READING - Is Silicon Valley the Future of Finance?

London Value: The joy of a glass half empty 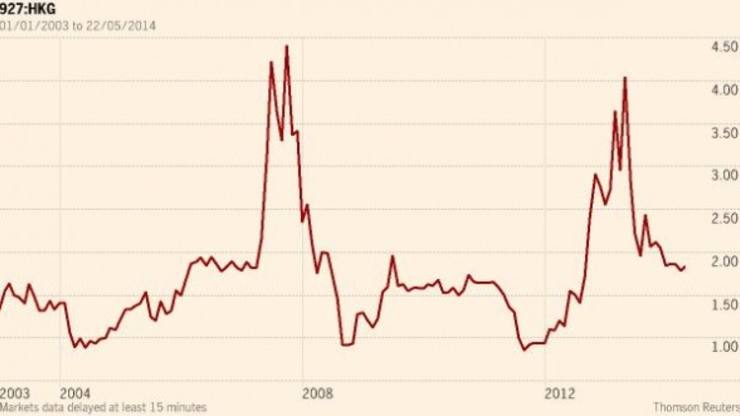 We’re at the London Value Investor Conference, where stock pickers try to persuade their peers to pick the stocks they have in their pocket. Self described pessimist Charles Heenan of Kennox is pitching a cyclical Hong Kong based manufacturer, Fujikon Industrial Holdings, a family controlled maker of acoustic headphones. His approach is to ask pessimistic questions: is it a flash in a pan, is it overvalued, is this the peak of the cycle? (Should I get that pain looked at? Is global warming real? Will anyone fix the baggage retrieval system at Heathrow?) According to BP’s Energy Outlook, which was released this week, global energy demand will continue to grow until 2013, but that growth is set to slow, driven by emerging economies — mainly China and India. To wit, the following chart from the presentation booklet:

This is painfully ambiguous parsing of doctrine. Still, it is the Church of England. We think this statement is the Church moving a bit closer to supporting fracking in Britain (as Cuadrilla scales back drilling in leafy Balcombe)…

FT markets round-up:“Efforts by global central bankers to reassure markets that there would be no rush away from accommodative policies helped fuel fresh gains for equities and a rally in US government bonds, although gold sank to its lowest level in nearly three years. Indeed, the gold price tumbled $53, or 4.3 per cent, to $1,224 an ounce, while silver fell 5.5 per cent to $18.56 amid further fretting over Fed chairman Ben Bernanke’s comments last week about “tapering” the central bank’s quantitative easing programme. The dollar, meanwhile, maintained its firmer tone, rising 0.4 per cent against a basket of currencies, with the euro below the $1.30 mark for most of the day after Mario Draghi, ECB president, said the eurozone economic outlook still warranted accommodative settings. His remarks echoed similar comments from David Miles and Sir Mervyn King of the Bank of England.” (Financial Times) Sluggish growth data give Fed cause for caution on tapering: “The US economy grew at an annualised pace of 1.8 per cent in the first quarter, significantly slower than previously thought, which could give the Federal Reserve some reason for pause as it weighs slowing its support for the recovery. The surprisingly sharp downward revision – from an earlier projection of 2.4 per cent first-quarter gross domestic product growth – offers evidence that US growth remained quite sluggish even as the Federal Reserve began contemplating tapering the tempo of $85bn in monthly bond buys.” (Financial Times)

FURTHER FURTHER READING - Noah Smith posts some links related to our Abenomics podcast with him.

‘Collectively, humanity has yawned and decided to let the dangers mount’

So writes the FT’s Martin Wolf in his column today, which starts out noting that atmospheric carbon dioxide concentrations exceeded 400 parts per million last week, the highest level in 4.5m years. As he says, if we take a prudential view of public finances, then surely a similar approach to something irreversible and much costlier” is warranted.<

Where are all those natural gas fleet conversions? 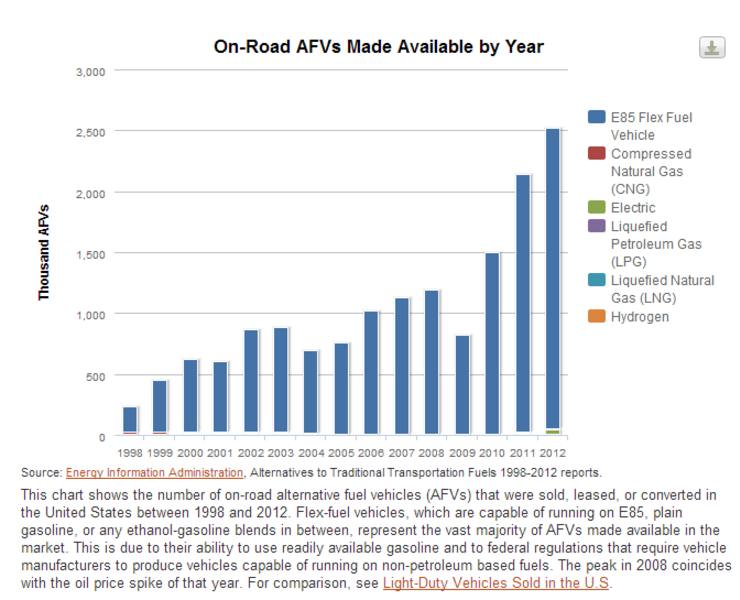 Since 2009 the stark contrast between oil prices (high) and natural gas prices (low) in the US has prompted questions, and visions of a new future of transport fuels. There was some excitement that this might be gathering steam when Warren Buffett’s freight train network BNSF revealed it would trial LNG powered trains. This is the sort of thing that T. Boone Pickens has been pushing for years: use domestic natural gas as transport fuel to reduce costs, reduce emissions and diminish US dependence on oil imports, while providing a ‘bridge’ to renewables-based infrastructure. 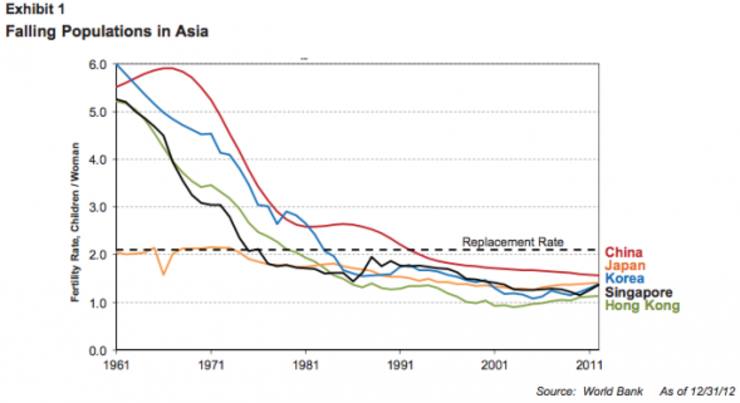 If you submit to theoretical physicist Geoffrey West’s urban development theories, then you’ve probably aware of the idea that humanity is set to face a critical crunch point soon enough (if not already). And by crunch point, we mean — either humanity throws everything it’s got at speeding up technology to ensure its resource consumption-to-population footprint becomes manageable, or we wither away. (The Roman Empire, by the way, is perhaps the best example of a civilisation which failed to make the next great technologically leap to the carbon age and did actually wither.)

The operation was a complete success; the patient died. Who thought we’d see a need for that joke again in relation to the EU, so soon after Cyprus? This time it’s the carbon emissions trading scheme, or EU ETS, and the consensus is it’s been dealt a near-mortal blow by a vote in the European parliament. Big news for the European Union Allowances market. From the FT’s Pilita Clark and Joshua Chaffin: The European Parliament has voted against propping up the EU’s emissions trading scheme in a move that sent prices plunging to new lows in the world’s biggest carbon market.

Clearly, all this green stuff can wait

Today should have been the day when ex-BP chief Tony Hayward and a raft of other energy and security luminaries got to their feet at a conference hosted by the UK’s biggest green power trade body. But the Renewable Energy Association’s “Symposium 2013” at the historic Mayfair headquarters of the Royal Institution has been cancelled due to lack of interest. The programme’s here if you can be bothered to click. China’s energy consumption is legendary (okay, its everything consumption is legendary). More coal, oil, hydro, solar, and wind power than… than just about anyone. The coal numbers in particular are mind-boggling. By 2011 China was consuming almost as much coal (3.8bn tonnes) as the rest of the world combined (4.3bn tonnes). The figures on oil consumption are almost as striking. They consume about 10m barrels a day; more than 10 per cent of world production.

Value-at-risk for oil and gas reserves? How much of the oil and gas sector’s asset valuations could be at risk from climate mitigation policy? The International Energy Agency’s latest annual World Energy Outlook, released in November, followed the popular practice in long-term forecasts of using several scenarios. One involves global policymakers moving to limit atmospheric CO2 concentration to 450 parts per million, in order to limit to 50 per cent the probability of average temperatures rising 2 degrees or more. The problem for fossil fuel companies is that could limit their ability to utilise all their reserves. This is the most awesome chart we’ve seen since Lisa’s Starbucks tax graphic: Goldman Sachs comparing the attention given to climate change, the eurozone crisis, and Justin Bieber.

US shale oil abundance: Bernstein vs the IEA When the International Energy Agency’s big annual report came out last week there was a big top line story picked up nearly everywhere: that US oil production will overtake Saudi Arabia by about 2020. This is due to projected rises in oil being wrung from the sort of shale formations that have been the source of vast new supplies of natural gas in the past few years. The ECB has voiced support for imposing losses on the senior bondholders of Spain’s most damaged banks — a significant change of sentiment for the central bank, albeit one that was rejected by Eurozone finance ministers. The WSJ cites people familiar with the discussions who said ECB president Mario Draghi made the position clear at the eurogroup meeting last week. The ECB had previously opposed such bondholder haircuts during the 2010 bail-out of Ireland’s banks. The chief reason ministers rejected such a move was the Irish precedent, in which taxpayers bore the burden of repaying bondholders in the country’s failed banks. (Wall Street Journal) The 9% “temporary buffer” capital ratio for European banks will become permanent, says the European Banking Authority chairman. Andrea Enria told the FT “We want the banks maintaining this capital level and gradually moving to the Basel III full implementation. We will be asking the banks to develop capital plans to get there.” (Financial Times)

Some highlights from Monday’s FTfm. Brussels targets big bonusesExisting pay policies create incentives for fund managers to take excessive risks and must be revamped to protect investors, according to the European Commission. It says bonuses should be “considerably contracted” if a fund or fund manager underperforms, via both reductions in current pay and also through clawbacks of previous payouts.

Newer results You are on page 3 Older results